In the Hall of the Mountain King, Pt.6: Barney the Bear

Ami steps up to the large wooden door and knocks, while Rob and I stand one step behind and below, mute.

What can you say?

It’s like lining up for a caning at school, back in the days when they cured naughty boys like Rob and myself of over-indulgence with a swift whack on the behind.

It’s odd, though, how naughty boys seem to be the ones that end up in places like Kalimantan either saving humanity or living a life of a dissolution, or both.

It’s just a question of what you find to believe in, but then as any good naughty boy will tell you, nobody can actually hand you belief, you’ve got to find it for yourself.

So you’ve just got to go on being naughty until you find something real enough, true enough, and God help us all, beautiful enough, that will bring you in from the cold, of its own accord.

(That is, if you keep honour with yourself, and don't succumb to the yapping of Poodles along the way, which is easier said than done. There are a lot of Poodles, and their logic is so poodle tight...)

As Jesus said to Thomas, in the Gospel of Thomas: I shall give you what no eye has seen and what no ear has heard and what no hand has touched and what has never occurred to the human mind.

... which does, if you think about it, put it beyond the reach of a lot of the known world.

("How freakin' far have I got to reach, Lord?" asked Thomas.)

Ami’s wearing her inscrutable ‘one size fits all’ Asian Happy Face, a great skill, and something that is impossible for Westerners to effect, no matter the effort.

Her face, even before the door opens, is radiating complete non-threatening, compliant tidak papa, ‘tidak papa’ being bahasa Indonesia for ‘no worries’, and ‘she’ll be right, mate’, as we say in Australia, and ‘it’s cool’, as they say in America (there being no equivalent in German.) 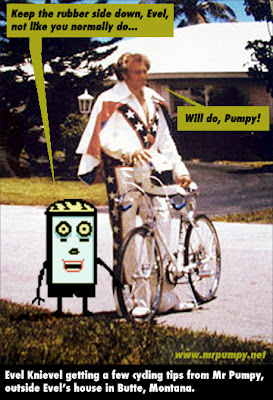 The Happy Face is not genetic, but simply a social skill that requires years of training, but you have to start early, like Tiger Woods or maybe Evel Knievel.

In fact, Ami’s in such top form for the big occasion that she looks like she’s stuck one of those small, round Happy Cushions on top of her shoulders, and it’s impressive. (You can buy them at the market in Palangkaraya for a dollar. They come in red, pink, blue and yellow.)

The big white Mickey Mouse eyes and the ludicrous Gavin Jenkins’ smile* say ‘I want to play’ and ‘I have a very small brain’, which could be rather boring, except that in Ami’s case, being female, there’s an unmistakable subtext of lay down your sword Achilles, rest your troubled head on my welcoming breast and I will transport you...

*Gavin Jenkins was a fellow pupil in primary school, and he was perhaps the dumbest human being I have ever met in my sorry life. When in trouble, he smiled like a Happy Cushion, believing that this most guileless of facial gestures would win him through even the most critical of situations, ones that Jesus Himself would have had trouble with. The day Gavin took my beloved marbles, and I confronted him about it, was the last time he ever smiled like that in my presence, at least until they replaced his front tooth, at great expense and flowing of blood. As you can imagine, I got an awful caning for that little episode, from the very formidable Sister Marguerite, our school principal, viz;
“Felix,” said Sr. Marguerite, looming over my tender 10 year old self with the cane, “that was not a very Christian act!”
“Yes, Sister,” I replied, “but Gavin took my marbles and wouldn’t give them back! And then he smiled at me!”
"He smiled at you?"
"Ah, yes..." I said.
“Oh, for the love of God! What are we ever going to do with you?" she said. "Now, bend over!" which I did, knowing the game was lost.
“This is going to hurt me more than it’s going to hurt you,” she added, flexing the cane.
“Then don’t do it, Sister!” I replied quickly, and quite reasonably I thought, but which, I can tell you, was not the right response.

Yes, the Happy Face, what a formidable weapon it is.

Of course it's fine if it’s working for you, on your team, so to speak, attending your every need, molding itself effortlessly like Plasticine around every jagged edge you call an issue, massaging every Engram out of your colon with strong, soothing hands, sending you blissfully unawares into the Land of Forgetfulness.

But of course, everything in this dualistic universe in which we reside has a dark side, skills just being skills, massages just being massages, so it all depends on who is driving, and what they want.

And everybody, except Lord Buddha (Peace be upon Him) wants something…

We reach into the dark, past the phantoms and the feints, searching for a handhold, a foothold, a corner of earth, and further, down through the fissure in the rock, deep into the cave where the Genie lies, and then, and only then, can we see what animates the heart of that which we face.

At that point, we’re either home, or at war, and it doesn’t really matter which. The main point being that we know where we stand, and can act.

But as Ringo (Peace be upon him) tells us, it don’t come easy…

Rob’s gone ‘Turtle’, which may be the Western equivalent to the Happy Face Defence Strategy, but that is, I will admit, a little like comparing a World War II German Tiger Tank to a Stealth Bomber, or perhaps Celtic Bonfires to NORAD.

‘Turtle’, with its distinctive raising of the shoulders, withdrawal of the head and a field of vision narrowed to the circumference of a Vegemite jar, radiates more of a ‘I don’t want to play’ and ‘fuck you’, with a strong subtext of 'I can’t handle this.'

In a word, it radiates ‘fear’, which is definitely not the same thing as the tantalising promise of balmy evenings spent imbibing gamelan music while your small brained but highly pliable seven veiled companion attends to your every fantasy.

I know which one I prefer, but it’s a dangerous game.

In fact, Rob looks for all the world like he’s expecting the thudding of trolls and the resounding rumble of a Fee Fye Oleh Oleh! I smell the blood of a Rich Bul-e! and you’d have to mad to offer up your body to that, so hence the Turtle Pose, I guess.

My own fear is sudden and outrageous possession by Barney the Angry Bear (in an Enclosed Environment.)

Yes, Barney, I know him well…

Still, let’s face it, it’s not my money, and even if it was it’s only 500 dollars and at the end of the day it might sting but it’s not going to bring the house down.

Not so Barney, though; he can bring the house down right on top of me.

But then again, when it’s all said and done, who gives a shit about the mewang and the polisi and all the bullshit rules from Lilliput?

But then the Lilliputians do seem to have us well tied up, and as much as I attempt, through objective logic, to deny the existence of all the little strings that bind, I have to admit that this whole thing has gotten to me, and I’m feeling emotive.

Barney may be, as we speak, prowling the plastic bag strewn streets of Lilliput in search those that heap injustice upon me, his beloved master.

An abridged scientific note on Mechanisms of Emotion from the Kiev World Book Multimedia Encyclopaedia (which comes free with your Mac):

Someone who encounters a bear in the woods would probably interpret the event as dangerous. This sense of danger would cause the individual to feel fear. Thus, a person who met a bear would probably run away, which would increase his chances of survival.

Which is fine, but what about if the freakin’ bear is inside of you, Mr Kiev?

You didn’t think about that, did you?

Now moving on, while Mr Dunderhead Kiev has a bit of a think, let’s take our Scientific Bear Story as a kick off and look at the situation from the bear’s point of view:

Barney the Happy Bear goes to the Zoo!

There was once a naughty, happy bear named Barney, who frolicked the day away in the cool, wide and salmon-rich spaces of unfettered Tundra Land.

One day he went to sleep, and woke up inside a cage in, in a zoo, in Lilliput. (It happens.)

Inside the cage was another former Tundra bear, Bobby, who was at that very moment having his peanut butter sandwiches confiscated by the zoo-keeper as punishment for rutting on Ami, a local she-bear (also in the cage), in full view of the zoo-going public, which, it seems, is against the rules.

(Notwithstanding the fact that the zoo-going public can often be seen at the zoo rutting on each other, this being Lilliput, and it’s hard to find a place to do your rutting in private.)

Now, the zoo-keeper, just to be safe 'cos you never know with Tundra bears, had brought along an armed security guard.

So here’s the set up: Two tundra bears and one local bear in a cage, one zoo-keeper reaching in to take the peanut butter sandwiches, and outside the cage, a security guard with a gun.

Keeping in mind that the zoo keeper and the security guard, not having ever watched Animal Planet, do not realise that bears have feelings too (and I’ll bet you three bowls of rice to a peanut they've never seen Free Willie I, or II.)

Barney does, indeed, have a decision to make, and he worries me more than the mewang, more than the polisi man and even more than standing in Starbucks with my fly undone.

Keep in mind, also, that although I’m Barney’s master, I may not have complete control over his actions.

I wish I did, but I'm beginning to wonder whether I have any control over Barney.

Yes, control, what an interesting thing it is; how we slave for it, work for it, hold on to it as though our lives depended on it.

Sit down Barney while I dope you up and stuff you in a cage.

Yes, you can bring Barney in, beaten and bruised, cowered and clipped, but as any good naughty boy on a bike will tell you, he either comes in of his own accord, in full splendor, or forget it.