A ride through the Nepali Terrai into India

Just beyond Mugling Bazaar the road splits, one leg heading due west to Pokhara, the other turning south through a tight valley, following the Trisuli River and eventually easing out onto the forested plains of the Nepali Terrai at Chitwan National Park, and the Indian border.

I head out of Mugling at 10 in the morning in bright sunshine and take the road to the left towards the Indian border.

I spent half the night coughing up phlegm and I'm full of gunk. Egh! Bronchial problems. Who’s a stupid cyclist?

When your body temperature drops, you stop and take on food. It’s ABC stuff, but I was having so much fun freewheeling through the mountains, who’s got time to eat a chappati and change a wet teeshirt?

I really should know better, but let’s see if I can’t ride it out.

I push on over the bridge out of Mugling and on my left the mountain rises vertically, beautifully, into the mist above and down on my right, a hundred metres below, the Tusuli River, fed by uncountable bursting mountain streams, has grown wide and massive.

It’s a now pounding torrent of white water, powerful as a god, sending giant shoots of cascading water up over boulders and into the air. This is a landscape on a big scale: a great opera, powerful, energising, full of wonder.

The road continues to sweep downwards, but as soon as it turns up and I need to pedal, I start coughing and wheezing, and my legs feel brittle and empty, like rice-cakes. And then the rain steps in, big time. Shi-it! Water is sliding off the mountain onto the road at unexpected spots, and one slip and I’m dead, or worse.

It’s time to pull in.

I sit close to the fire with ten other steaming Nepalis and sip hot milky chai (tea). The teashop is perched on the side of the road overlooking the Trisuli Rover, and is the usual dirt floor, thatched roof affair with no back wall.

The old guy to my left is nodding and patting me on the knee (a sign of filial affection), and the guy on my right is smiling so much he has to be drunk.

“My sister beautiful?” says the drunken man, pointing at a grubby young woman in plaits and traditional dress sitting on the bench at our back. She gives me a shy smile and everybody laughs.

“Sahib, my sister, she like you!” he says, leaning over, putting his arm around my shoulder and breathing alcohol into my face. His sister (?) grins, and for one small moment I’m at one with the mountains, lost to the civilised world, but I make it back.

I raise my arm in the air and let it fall limply at the elbow, and make a joke about not being up to it, what with the cycling and all, and this goes down a treat.

The old guy on my left is laughing so much he breaks into a coughing fit and spills his tea, and somehow, magically, the raksi (rice wine) appears.

“Make you strong!” says the drunken man, and hands me a glass.

I once attended a raksi party in a small village way out in the western Himalayas of Nepal, where I was doing some work.

They also say that the howling – god knows what it sounded like - scared away a band of robbers, so in the morning, despite a crashing headache of Himalayan proportions, I was something of the village hero.

Raksi, dangerous stuff, but maybe it’ll fix up my cold? 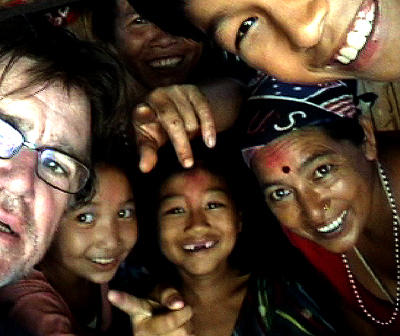 I knock back a couple of glasses, and lean easily back, and someone turns on a radio, and the world falls away once again. The booze is soaking into my bones and rushing to my head, and it's too late to turn back now.

I float upstream with another glass and nestle in beside the laughing girl and show her my passport. Life is good! And this smoky, gritty room of dank smells and jostling people is home, and it's about as earthy as it gets without converting.

I wake up a couple of hours later slumped against the wall, and the rain has stopped, and the party is over, which may be a good thing. There’s no sign of the drunken man and his sister, so I drink a tea and go outside in the fresh mountain air and stretch and cough, and try to coax some life into my limbs.

According to the map it’s only about 10 km to Narayanghat, and the teashop owner assures me there’s a hotel, so that might do it for the day: 34 kilometres, a few drinks and some new friends, and that’s an OK day’s work, no matter what anybody says.

A kilometre past the teashop the road flattens out, and I’m suddenly out of the mountains, and so much for rolling downhill all day. From here on in it looks like I'll have to work.

It’s up and down into Naranyaghat, and my legs feel like lead and rice-cakes at the same time, and I’m coughing and wheezing, and nursing a headache, and debating that age old question: is biking hell?
Posted by Felix and Mr Pumpy at 7:05 pm 2 comments:

Kathmandu to Gonda: Pt.1 - Out of the Valley!

A ride through the Nepali Terrai into India. 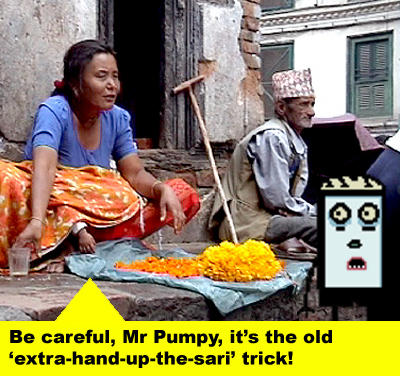 Part 1: Out of the Kathmandu Valley!
Kathmandu to Mugling Bazaar – 110 km

It’s an easy 7 kilometres up out of the Kathmandu Valley to the small village of Thangkot. I stop for a tea and then work my way another kilometre up the hill to the police checkpoint perched on the top of the mountain, and look down the other side.

Check out the road! 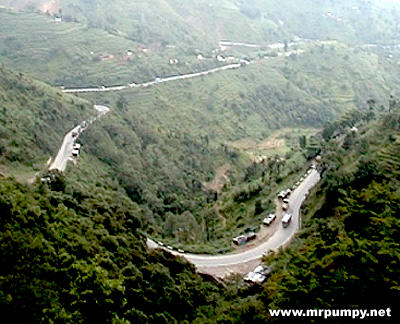 It rolls straight off the mountain and plunges almost vertically down the other side; a contorted, looping ribbon, flipping left and right, going down, down, down until it disappears into the valley mist three thousand feet below.

This should be fun!

I check the brakes, jostle the panniers, pull my cap down hard on my head, and roll forward.

You go past wooden teashops, across a bridge and straighten out beside a line of trucks parked by the roadside. The guys standing around shout and give you the thumbs up, and the road falls away again to the right, and you follow it down and the cold mountain air cuts at your cheeks.

How long can this go on?

On both sides of the valley the mountains vault straight up into the sky, vertical and deep green. To the left and right, up above, there’s small brown and yellow mud-brick cottages perched on the cliffs, alone and in small groups, with wisps of silver smoke swirling around their thatched roofs.

Thin white footpaths lead away from the road and wriggle painfully up the mountainside beside snapping, rushing creeks of silver water, and terraced fields sweep impossibly up the slopes, one horizontal cut after the next, and Jesus, I don’t want that job.

A thousand feet below the Trisuli River is thumping white water over boulders the size of two story houses, and I can see the road up ahead, cut into sheer vertical rock, twisting and turning, following the river and disappearing through a tight gap in the mountains some ten kilometres away. Oh, happy day! 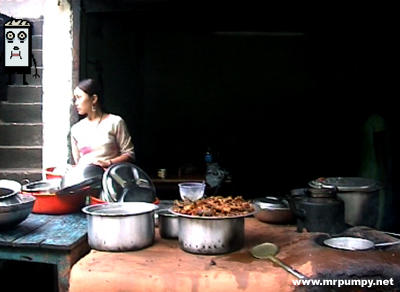 I make it into Malekhu (70 km) for lunch, just as the clouds roll in, and with it the rain. This is the monsoon season, and a bad time to be riding, but what to do, and who cares?

This is riding as God intended it, and I am but a humble servant of the Lord, on a bike. However, if you were going the other way, east up the mountain into Kathmandu, you may need to know where you can stop and curse the Lord for his all-knowing perfidy.

From Malekhu you’d be cycling pretty much 70 kilometres uphill to Kathmandu, with the last 15 or so kilometres before the start of the valley extremely steep.

Best of luck, but you really are going the wrong way.

I eat some dhal bhat (standard Nepali food, consisting of curry, dhal and a small mountain of rice), chat to the girl and push on.

I ride for an hour through drizzling rain.

Mercifully the road’s paved and in great shape, but it’s greasy and I’m on full alert. Trucks and buses pass in bursts, and I’m forced to the side of the road at times, holding my line, waiting for clear road, praying for deliverance.

Toot! Too-wooot! Another painful air-horn blast to the ear, a wave from the smiling jockey, 'the finger' from me and the truck is past, and I'm going downhill along with my mood.

Mugling Bazaar (110 km from Kathmandu) is a regional sized, non-descript town straddling the highway. By the time I arrive I’m wet and drained and just give me a tea, Raja, and don’t ask questions.

“Hey, you there, in the shorts! Leave the bike alone!”

I check into a hotel (Mugling has numerous hotels), take a cold shower and go in search of food. Dinner will take about forty five minutes if I stretch it out, lean back in my chair and look cool, and then it's a four walls and six (maybe seven) demons for company until morning.