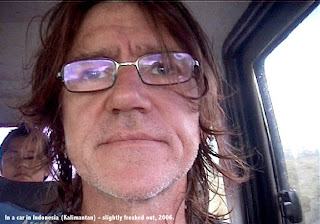 Last week I ran into Brad from Melbourne, my home town. He was sitting alone with his bike at a table on a street cafe 100 km south of Luang Prabang, and had that cyclist's 'raw prawn' look - flushed red skin, shoulders hunched, head bowed (as though the floor, or maybe your shoes, are of pounding importance, even more than the sweet Lao girl in a yellow and blue sarong who is serving you your second coffee, which is something.)

Brad had just cycled up from Laung Prabang town, mainly uphill, and I'd just come up by bus from Vientiane, so of course, after introductions, he asked, "What's it like from here, Felix?" He was heading to Vang Vieng, some 200 or so km south.

Brad emailed me the other day from Melbourne, and pointed me to the Lonely Planet Thorntree site, where it seems someone was asking after me, wondering where I was, having made no posts, nor Mr Pumpy updates for 2 years etc.

So this prompted me to write.

I'm in Luang Prabang, sans bike, but will head back to Kalimantan, Indonesia, soon, to pick it up - and then onto the next big thing, riding from Alexandria to Kashmir. There's reasons for doing this particular trip, and the end-goal is to write a book.

I've been living and working in Central Kalimantan, near Palangkaraya. I taught English and Film at an English medium school through 06, and managed a few rides.

As you can imagine, making films with a bunch of 12, 13 and 14 year olds was a lot of fun, and inbetween the heat, rain, power cuts, scorpions and fire-breathing centipedes, we managed to get quite a few made. End of year school night was a riot indeed - "Hey, look mum, I'm up on the big screen!" Mum was duely impressed.

Strange place Kalimantan; the end of the earth, the centre of the earth. I love it, and it reminds of Cambodia in many ways; an 'out-of-the-way' feel and a dodgey social infrastructure in which nothing is ever quite going to work, no matter what you do. There are times, standing by the road, a line of ramshackle wooden huts and restaurants to your right, a flat expanse of dry, stringy Eucalyptus trees to your left, heat pounding onto your head, that you'd swear you were in Cambo.

But it's the people, as always, that make it. It's basic, and we have nothing much else but each other, which is fine by me. The human scale is a good one - the flicker in the eye that says 'I see you', like starlight across the fathomless black void that separates us all, on a bike or off.

Well, maybe I'll start posting again, I don't know... I'll need to think about it. It's been an interesting last 3 years.