The Hall of the Mountain King, Pt.5: Terry, the Inquisitive 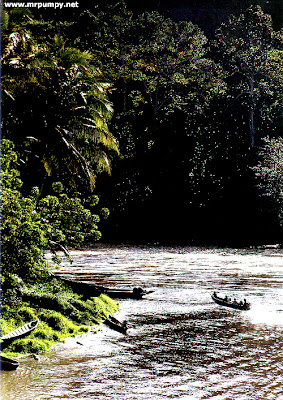 The mewang’s (district Dayak chief) house is the usual rambling Dayak affair - on stilts, made of ironwood and big enough for 3 or 4 nuclear family units, except that it’s surprisingly, alarmingly, neat and clean.

Where are the dogs?

Where’s the scungy student share-house style couch on the veranda with the depressed cushions, rogue springs and this being Kalimantan, unthinkably creepy things living inside, perhaps even a snake?

Where’s the plastic bags flapping about in the front yard and the nest of virulent black ants that attack you the second your foot comes off the pedal of the motorbike (or bicycle) and touches ground? 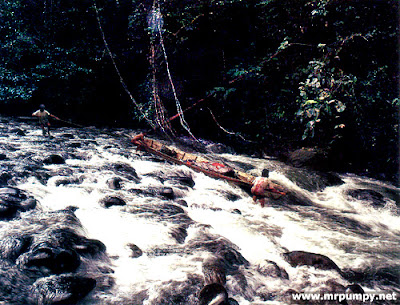 No, Robert, Ami and I are experiencing, from the looks of it, a scrupulously cared-for house fronted by a meticulously well kept white-pebble yard which itself is sporting little islands of well snipped greenery, ringed, no less, by lines of potted plants with… what are those flowers?

Silver bells, cockleshells, and pretty maids all in a row?

It certainly looks like it, but how would I know?

Mary, Mary, quite contrary,
How does your garden grow?

I didn’t want to know.

Who or what, exactly, was a contrary Mary? Whatever/whoever she was, she was not, in my mind, the kind of lady, young or old, that little boys should go near, ever.

She smelt of death, or worse, dying.

Specifically, it was her fingers that scared me, viz.;

I am standing on Mary's front step. She is standing behind me, arms around my chest. There is no escape. I am trapped, abandoned, and together, they are two of the scariest words in the English language, no question.

Her contrary hands have slipped under my shirt and her contrary fingers are running all of over my tender, young body, feeling it, caressing it... she's mumbling something... I can't make out the words, but they can't be good.

I've always felt a slight unease in overly tended gardens, as you can imagine.

The mind is a strange thing. 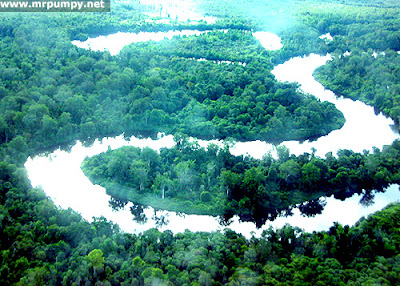 Some weeks before I came up to Robert’s place and got bogged down in the Sex Behind Closed Doors Saga, my friend Kevin, a Kiwi expat, took a visiting friend, Terry, into the jungle.

Terry was on four weeks vacation from Auckland, and wanted to see the real Borneo before he returned to the grind, so Kevin, having some spare time himself, took Terry deep inside the belly of the beast, as far north as they could get without falling off the map.

“We were pretty deep in, deepest I’ve ever been,” said Kevin, chuckling. “Just south of the Malay border.”

They ended up staying in a Dayak longhouse for a week, there not being many guest houses up beyond where the roads stop.

At night they would sit on the veranda talking and drinking with the chief, amongst others, with Terry, the Inquisitive, working hard to get a grip on this strange and exotic new world he'd found himself in.

“Your friend Teree asks many questions,” said the chief, to Kevin.
“Yes, he’s been to university, Pak!” replied Kevin. “He’s a computer genius!” (Pak is the common polite form of address to a male, equivalent to Sir, or Mr.)
“Oh!” said the chief, much impressed, turning to look at Terry.

Not many forest dwelling Dayak’s get the chance to go to university and become computer geniuses, so this was a moment to be acknowledged – a man of high learning in their midst.

(Terry, if truth be told, is apparently just a run of the mill programmer, but for all the coding going on in the jungles of Kalimantan, he could present himself as Steven Hawking and nobody would know the difference, sans wheelchair, even.)

“What’s he saying?” asked Terry, wondering why the chief was suddenly beaming at him.
“The chief likes you,” said Kevin.
“Oh,” said Terry, smiling back.
“Have another drink, Teree!” said the chief.

The chief, happy to share some local colour with the wise man from the Land Beyond Where the Kangaroos Dwell, proceeded to tell his visitors about the giant water-dwelling black snake that lives in the river north of the longhouse, and that if they went up there they must take a guide and be very careful.

“It will swallow you!” said the chief, matter-of-factly and knocking back another rice wine.
“How big’s this thing?” asked Terry, impressed, having seen Anaconda five times, apparently.
“About half the length of the longhouse,” answered the chief, gesturing along the veranda.

That would have made it about 25 metres long, Kevin told me, as long as a cricket pitch, and then some.

“Have you actually seen this thing?” Terry asked the chief, somewhat incredulous.
“Yes, I have,” answered the chief, lowering his voice and nodding soberly. “On a few occasions.” This was obviously not a subject to be played with.
“Yes, but is it real?” insisted Terry.
“Well, of course it’s real!” answered the chief, momentarily puzzled; for a wise man this bule (white man) was certainly asking some odd questions.

“Yes,” Terry went on, leaning forward and making an up and down movement with his right hand, “but is it real like you can lay it on the ground and chop it up?”

The chief looked at Terry in total disbelief. “Well, of course it’s not! What are you, an idiot?” and stood up and walked off.

Kevin told me that later on he asked the chief to forgive Terry because he was new to Kalimantan and in the Land Beyond Where the Kangaroos Dwell, they didn't know about such things. Terry might be stupid, Kevin told the chief, but he was sincere.

“The chief shook his head, said OK, but was pretty firm about ‘no more questions’!” laughed Kevin.

“Of course,” he went on, “you can imagine when next the chief’s favourite nephew asks permission to leave the jungle and go down to the big smoke in Palangkaraya to attend university.”

“I want to learn the ways of the bules, uncle, and come back and help our people,” says the hopeful young man.
“Over my dead body!” says the chief.

Belief is an interesting thing. 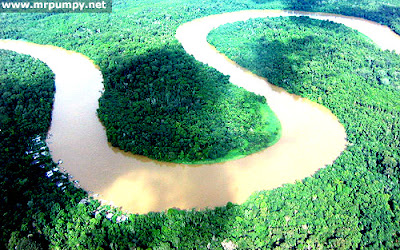 “You know,” said Kevin, after he’d finished the story, “living with these people long enough, you actually start to believe again, but in exactly what it’s hard to say.

“It’s like you take a breath of air and then all the colours come back into your life, and you feel like you’re inside a painting and kind of part of it... not outside looking in, judging it. You know what I mean?”
“Yeah, Kev, I've got some idea,” I said.
“The cynicism back home is just so much smoke pouring out of the machine, and it blankets everything, like kabut asap,” he mused. “Maybe it’s the by-product of burning off the bullshit?”

“It’s going to be hard going back,” he said, wistfully.

We sat on his veranda that evening and talked into the night, until the silences that sweep up out of the forest like waves finally drowned all our words, and there was nothing more to say.