The Hall of the Mountain King, Pt.3: The bleak Plane of No-Speak Above: Kabut asap (smoke fog) over Indonesia and beyond...

Early in the evening Robert suggests I borrow his motorbike rather than arrive at the mewang’s (district Dayak chief) house on a bicycle.

“It’s all about how things look, Felix,” he says, “so me and Ami will take her’s and you can follow on mine.”
“Good thinking, Rob,” I say.

Robert is stating the obvious, but well and good. Only the poor and the powerless arrive on bicycles, so let’s not exacerbate an already pathetic situation.

“Maybe you could tie your hair back, Felix?” he asks, demonstrating.

Shall I wear a suit, Rob?

Rob’s understandably nervous and trying to get everything shippy shape before we sail into enemy port and hand over the booty, and it is all about how things look, profoundly so.

So profound, in fact, is this surface culture, that for a Westerner, it’s easy to completely miss the brain behind the eyes that see you; and I must say, that brain worries me at times.

Not that it's all bad either, it's just another brain,. but like all brains, it depends on what's driving it.

In Indonesia long hair marks you out, at best, as a non-conformist, which is not a good thing in a society striving for containment.

At worst, you’re a ne’r-do-well drug taking rock ‘n’ roll fool, which is not something many mewang’s aspire to, nor for that matter, many minders, which is effectively my role in this depressing operation.

However, when it’s all said and done, I’m not sure it’s even worth worrying about how our motley little group appears to the enemy, motorbikes or not. We’re just a couple of clodding bule fools with their home-grown, pretty (and possible 5th columnist) kampung companion.

Signals get sent, signals get received, we search out the weak points, sort out the power balance, and if we can’t agree, we either to go to war, or somebody pays, or bends.

Of course, we’re doing the bending; their game, their rules, their turf and they hold all the red cards. It’s been agreed that Rob will get shafted in the locker room, and I’m just here to make sure he only takes the agreed upon strokes.

Not that I have any real power at all, other than the ability to count the thrusts and listen to the groans, and I’m not looking forward to it. Robert’s groans are my groans and I can hear them already.

In my favour, though, I do belong to Subud, a quasi-mystical spiritual sect that has it’s roots in Indonesia, and which is, by the way, the connection that brought me down to Kalimantan in the first place, some two years ago.

(Subud is an acronym of Susila Budhi Dharma. It's an international spiritual organisation that originated in Java in the 1920s. The Subud practice aims to train the feeling within the movement of the spirit.)

Considering the fact that there are no secrets in Indonesia, and Robert felt it prudent to let the local police know that I would be accompanying him to see the mewang (more bending), it’s reasonable to assume that the police have milked the local grapevine as to my identity and social position.

Not that there’s much to it, really, but belonging to Subud does give me some punch.

There’s a small but strong contingent of Subud members involved in various business and education ventures throughout the province, and we’re (we, us, my people!) well connected, notwithstanding the fact that some of the thinking on the ground is that we go in for black magic and free sex.

Some months back I was sitting in a local warung (food and drink stall) one hot afternoon, drinking coffee, listening to a couple locals talk about me, safe in the assumption I spoke little or no Indonesian.

Knowing I was with Subud (there’s no secrets), the squat, knowledgeable chap with the frilly moustache, was happily telling his mate that Subud is, in fact, all about that; black magic (black magic is big in Kalimantan) and the proverbial free sex (free sex is not big, but widely discussed and it is widely assumed, even by the educated, that all Westerners go in for it) and on it went.

I sat and listened, and what can you say?

It’s the brain that worries me…

Specifically, it’s that brain with power, position and weight of numbers.

The gun is a very tempting object.

I finished my coffee, said nothing and left, disheartened.

Indonesia periodically brings you to that bleak Plane of No-Speak.

However, that being said, this phenomenon is also one of the main reasons I stay, viz.; where else on planet earth can you find a relatively safe environment that will shut down your cognitive processes and render you clueless on such a dependably daily basis?

This place is a jem!

Of course, the question remains, as far as bleak planes go: How do you work your way out of it?

Of course, also, this is where the real work lies, and you hear the tearing cry in your heart, or you've missed the boat, basically. And that boat is so easy to miss...

Yep, clueless is a much maligned and much misunderstood thing in this world of ours, and it does take courage to embrace it, but there, for my money, lies the real heart of our intelligence as human beings.

Love and hate, thunder and lightening and the clear light of day, it's all there. 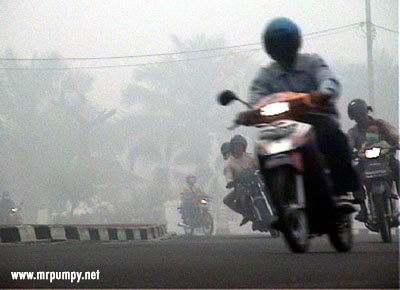 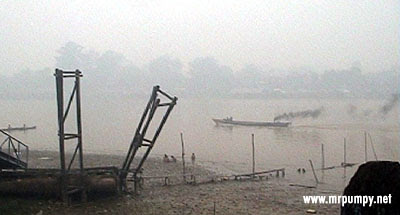 Above: Palangkaraya, the Bundaran Besar (the Big Roundabout) and the Kahayan River, burn season 2006.

During the burn-off season of August/September/October 2006 it seemed the whole island was on fire and belching smoke.

It was a bad year, as if the dreaded nuclear winter had finally arrived.

Most afternoons visibility was reduced to a paltry 50 metres, 10 metres on a bad day, the sun literally disappeared for a few weeks and soot and smoke permeated every cubic square centimetre of your life. 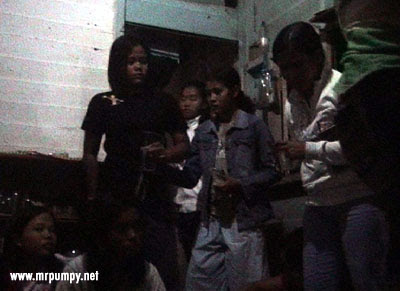 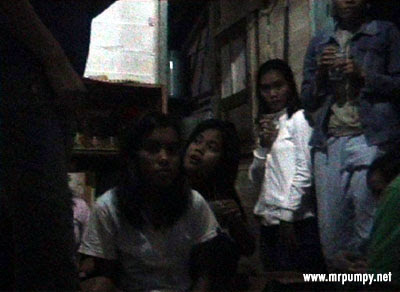 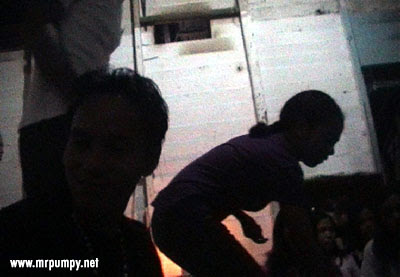 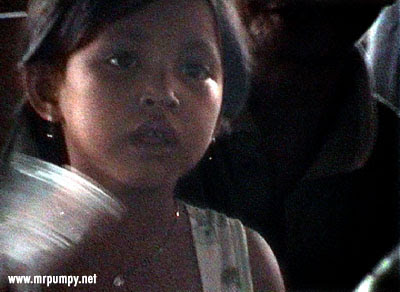 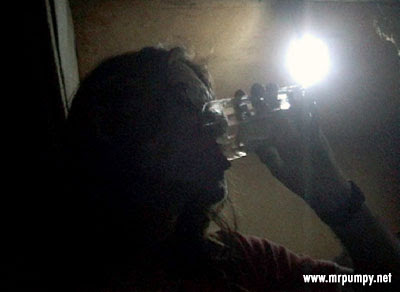 Above: Living in the smoke, 2006, the non-hermetically sealed experience. Mid-afternoon, turn on the lights.

Some of my more enterprising bule friends attempted to set up an hermetically sealed smoke free environment.

Going to visit was like docking with the International Space Station. After knocking and politely requesting permission to enter, you passed into a little room where you closed the outside door after yourself, and then, and only then, you opened the door into the main living area, which was cut-off from the outside world, save for the air-conditioning and water conduits, as best could be achieved.

Ah, the pleasure of the smoke free environment!

However, our neighbours, to a country, did seem to possess an odd sense of reality: ‘Can’t Indonesia get it together and stop this madness?’ they chimed.

Some weeks into the holocaust, in response to a strongly worded formal complaint from Singapore on behalf of ASEAN, the Indonesian federal environmental minister rejoined that he thought it was perhaps rather bad form for Singapore to be complaining at this juncture considering the fact that ‘we send you clean air for 9 months of the year and you never take the time to thank us for that.’

It’s the brain that worries me…

Mind you, we had to chuckle at the Singaporeans for complaining that their air pollution index was something like 10 times above the WHO recommended safety level; in Kalimantan itself we were 3,000 times (yes, you read correctly) above cut-off. We could only dream of 10.

I would think a well-connected, sect-belonging, long-haired, black magic, libertine guy sitting in your corner does command a certain respect, and I do thrive on respect.

Mind you, this being Indonesia, the local police may neither know nor care a whit about me.

You never know.
Posted by Felix and Mr Pumpy at 8:04 pm