The Hall of the Mountain King, Pt.4: Crispy Bacon!

Hate is an interesting thing - it drives us as much as love, although in this beige world of ours it’s more Poodle to talk about aversion, viz.;

Person 1: I say, chap, I’m feeling a strong aversion to having my personal boundaries penetrated forcibly by your good self!
Person 2: Thanks for sharing.

The word aversion (Dosa in Pali, the language of the great Lord Buddha) has slipped into common Western usage, to the best of my knowledge, from the Buddhist end of town, come barreling straight down the Politically Correct Expressway and entrenched itself on the large white divans of the educated and knowledgeable, like a fluffy dog.

Not that the Dalai Lama’s necessarily to blame (although I'm beginning to have doubts...); Dosa is more accurately translated as hatred.

Al least that's what they told me when I was living the life of a monk; not that they needed to tell me; any word short of hate to describe what I was feeling deep in the secret chambers of my heart was not going to float.

Not that, either, the Dalai Lama is in any way the Pope of the Buddhist world, but it's not surprising that things get lost in translation, even whole religious systems, and you don't even need to exit your own cultural base for that.

I’m only surprised that, as far as the West is concerned, the DL hasn't just closed the whole thing down and opened up a fish and chip franchise – it’d be a lot less trouble, viz.;

Our fish are fried deeply in loving-kindness… it’s the metta that makes the difference!

(Metta is Pali for loving-kindness, but then loving-kindness is Poodle Speak for caritas, love of fellow man, from the Latin, which is perfectly fine in the first place, I would think, canis in praesepi [dog in the manger] that I appear to be becoming...) 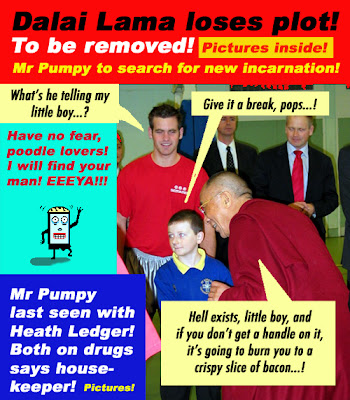 I did an interesting exercise with my students in 2006.

I was meant to be teaching English (and Film) at the local secondary international school, but I do figure that if I’m getting bored with the set curriculum, the students are too, the teacher-student bond being a strong, coiling rope of sensitive two-way impulse filaments, as real as your hat.

The film classes were fine - who doesn't want to be in the movies? - but the English smacked of good old, well intentioned, easy to defend, order, no doubt written by the kind of teacher I would have loathed as a student, and the teacher-student bond being what it is, the feeling would have been well and truly reciprocated.

Four weeks into the year I threw away the book, took the students into the auditorium and blindfolded them.

("Are you going to shoot us now, Pak Felix?" asked Robby. I love young people!)

After a few warm up exercises, I got them to sit on the floor and instructed them to conjure up in their minds a picture of someone they love, deeply. That done, I asked them to think of someone they dislike, a lot.

(I didn’t use the word hate, not at first, anyway. They were, after all, sensitive teenagers, open flowers awaiting my strong but gently guiding hand and deep worldly insight, and you do need to know how much the Tonka Truck can carry before the wheels fall off.)

Specifically, I asked them to search into their bodies and to watch, very specifically, how it reacted to the thought-images.

Fortunately, or unfortunately, Karim, the principal, just happened to be walking by at the time. (Which is something you need to know about school principals - they have a sixth sense when it comes to potentially odd behaviour within the school precincts.) 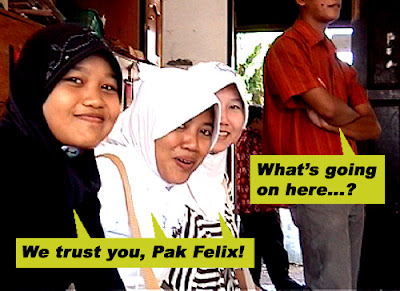 Hearing a small female voice on the other side of the auditorium door saying, ‘I can feel my chest contracting, Pak Felix! It feels weird…!’ I guess Karim began wondering what was going on, as principals are wont to do.
“Good, that’s excellent, Noor,” I replied, solicitously, “can you go deeper into that for me? Be more specific...”
Poking his head around the door Karim asked, "What are you doing, Felix?" in that measured tone that principals have which conveys both caritas and iron will, at the same time.
“Ah, English, we’re doing English, Karim," I replied, off guard. “We’re exploring adjectives… I think."

“Ah, can I see you in my office after classes?” he said.
“Yeah, no sweat,” I said, cheerily, the way you do when the customs officers at Melbourne airport ask if they can look into your bag, and even though you may look like you’re carrying drugs, or perhaps pornography, you’re not, but it doesn’t stop the fear rising.

You have to give Karim his due; firstly, for employing me, and secondly, listening patiently while I sat in his office three hours later taking it upon myself to shred the English curriculum (hoping to hell Karim hadn't been then one to write it in the first place) and finishing off with ‘…it’s just crap, the kids are learning nothing! Whadyawant, parrots or free thinking young adults!’ as I waved my hands in the air.

I love that silent moment when you’ve either just talked yourself out of a job, or the world is about to turn around and meet you, on your terms; it’s so pointy.

But it can go either way, and I’ve had both in my time.

Karim shook his head and chuckled, told me to do what I thought was best and said he’d ‘check back in a month’, God bless him.

(Partly, it must be said, that it’s hard to get any Westerners to actually live in Central Kalimantan – think Cambodia without the recent wholesale development, Thailand, Laos and Vietnam just across the way and no parties – that bosses are somewhat compelled to cut their employees a sizeable amount of slack, which, it also must be said, is one the reasons I live in Kalimantan.)

It may not sound like much, but to the semi-naked minds of a bunch of 12 to 16 year olds, half of them Indonesian, the idea that the content of thoughts can have such a marked affect on the physical body was a revelation of sizeable proportion.

Over the weeks that followed we developed that train of action, in many and multifarious ways, all the while articulating our experiences in the beautiful tongue, all the while returning to base; love, via hate (we eventually embraced the word hate, in context and meaning, as we did many other non-Poodle words, phrases and concepts - I'm not big on Poodle Speak in my classes, as you can imagine), light and dark, thunder, lightening and the clear light of the God given sun rising above the melting mist of another beautiful Kalimantan morning, which makes all laugh, dance and sing, together.

Karim was happy, the students were happy, I was happy, so it worked out pretty well in the end.

Still, success, failure, whatever, it all stuffs our face us into the heart of the matter (although you could say reveals our very own heart to us…), and a year later, Rob, Ami and myself are standing on the top step of the mewang’s house in Kerengpangi, tapping lightly on the door and sweating abundantly under the Indonesian smiles we are busily uploading for the occasion.

“Who’s there?” asks a surprisingly melodious female voice from behind the door (in Indonesian, of course.)
“It is us, three rabbits come to visit!” we reply. “Two white, one brown.”
“Oh, that’s nice,” says the voice, “we eat rabbits around here,” and the door opens…
Posted by Felix and Mr Pumpy at 9:12 pm